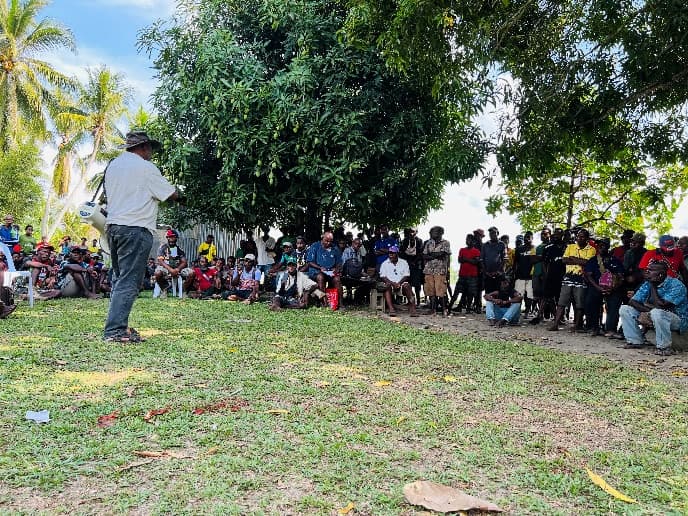 Martin Torovi from East Sepik Province speaking to the Sepik River communities at Timbunke during the CEPA community roadshow.

The CEPA-led statutory program discusses in detail the contents of the Environmental Impact Studies (EIS) submitted to the Government of Papua New Guinea in 2018 by Frieda River Limited.

The program gives people who would be affected by the development an opportunity to voice their concerns and provide feedback which is then considered by CEPA in its assessment of the project (including any approval conditions).

To enable impacted community participation, the roadshow was implemented in three phases in 2022. The first phase commenced in August and covered the Upper Sepik Region from the May River to Avatip village. The second phase in October covered the lower Sepik River from Kaminambit to the Murik Lakes. The third phase also in October, covered the villages in the Middle Sepik area.

“Over the years, people have expressed concerns and fears about the impacts of mining on the river system. These concerns are genuine. Many people have also challenged CEPA and the national government to deliver sustainable development initiatives that balance the environment, community and economic benefits for the Sepik region,” Mr. Wiruk said.

The community engagement program is an important activity prior to the assessment of Frieda River Limited’s application for an environment permit.

Refer to the Frieda River Project timeline to find out more.